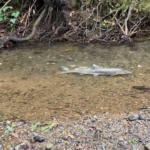 During some of the brief storms the Central California Coast experienced this winter, SPAWN staff observed salmon making their way up through the newly restored area of Roy’s Riffles, indicating that fish were making their way into the upper sections of San Geronimo Creek. After periods of heightened flows, enough to allow access to the smaller tributaries, SPAWN was able to survey Arroyo and Woodacre creeks. As of Feb. 12, SPAWN has recorded a total of three (3) redds in Arroyo Creek and a total of seven (7) redds in Woodacre Creek with a steelhead sighting in each creek.

In the video above, a female steelhead is seen digging her redd in Arroyo Creek. You can identify the fish as steelhead from the all white mouth, radiating pattern of small spots on the upper and lower lobes of the tail fin, circular spots along the top of the body, grey/silver neutral color body, with light pink cheeks and some pink coloration along their lateral sides. Steelhead spawning typically peaks in February and continues through April, so as long as it continues to rain, many more steelhead should come back to Lagunitas Creek.

We would like to thank the homeowners along these tributaries for allowing SPAWN to do this vital work and help monitor the sensitive salmon populations that reside within the Lagunitas and San Geronimo Watersheds.