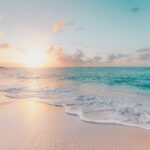 There are some Florida beaches with nearly all female hatchlings, with male hatchlings being rare and far in between. The gender imbalance adds another factor to the issues facing hatchlings. With only one in 1,000 hatchlings surviving to adulthood, the overwhelming trend of female hatchlings highlights the importance of fostering the best possible conditions for sea turtles and their eggs.