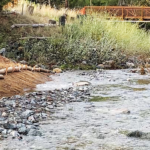 In the footage, the fish navigate through a newly created creek channel that was part of SPAWN’s latest salmon habitat restoration project on the former San Geronimo golf course. The site, known as Roy’s Riffles, restored five acres of San Geronimo Creek from past degradation to benefit salmon, other wildlife species, and homeowners in the San Geronimo Valley.

Following historic rainfall of 10 inches in a 24-hour period, where creek flows reached 3,000 cubic feet per second, the site held up with gravel deposits creating new spawning habitat, pools being scoured, and additional sources of large woody debris. These changes will help improve geomorphic and biological complexity through the reach. Salmon sightings were also reported in Woodacre Creek and Devil’s Gulch.

“We are thrilled to see fish making their way through this channel for the first time, especially after such strong flows,” said Ayano Hayes, SPAWN’s watershed biologist. “Numerous chinook salmon have been seen swimming through the riffles and milling about in pools. More rain will bring more fish upstream through the Roy’s Riffles site to make their way home this winter. Be on the lookout and listen for their splashing.”

From now until late January, endangered salmon species including chinook, coho and steelhead will make their final journey to the Marin County creeks where they were born to lay their eggs in nests, known as redds, in the gravel. Females will lay as many as 2,000-5,000 eggs at a time for the males to fertilize. Small populations of chum and pink salmon have also been recorded spawning in the Lagunitas Watershed.

Marin’s population of coho salmon is considered to be one of the strongest remaining in California and critical to the recovery of the species throughout central California. Historic assessments of the Lagunitas Creek Watershed estimated the spawning population in the thousands. Last year only a total of 173 total redds were reported.

Chinook salmon in Roy’s Riffles. Photo by SPAWN. Image/videos available for media to use.

The Salmon Protection And Watershed Network (SPAWN) is a program of the global ocean conservation non profit Turtle Island Restoration Network that protects endangered, wild coho salmon and the forests and watersheds they need to survive in West Marin County, California. Learn more at www.seaturtles.org/salmon.