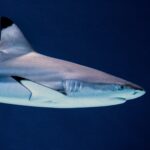 A recent study of shark meat and fins being sold highlighted the dangers that come with the practice and consumption of these products. A team of scientists from the United States and Hong Kong assessed the risks of shark products, and most of the products tested had mercury levels higher than local legal safety limits.

In addition, certain species posed a greater threat to humans than others. In the study, hammerhead sharks were cited as having higher mercury levels than other species. The study showed the importance of treating mercury levels in the market with a serious lens, and to be exact in their labeling.

Shark finning is the brutal and ecologically devastating practice of cutting the fin off a shark and throwing the animal back into the ocean to die slowly. Fins from as many as 73 million sharks end up in the global shark fin trade every year, including many endangered species.

At elevated levels it can be harmful to the developing nervous systems of unborn babies and young children, affecting cognitive, motor, and sensory functions. The more methylmercury that accumulates in a person’s bloodstream, the longer the exposure time, and the younger in age of the person, the more severe the effects may be.

To learn more about mercury exposure, you can find information on our website.