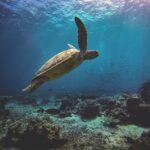 Todd Steiner, founder and executive director of Turtle Island Restoration Network, recently co-authored a paper studying the trophic position and niche of green turtles (Chelonia mydas) in the eastern Pacific. The study was conducted using bulk skin tissue of 718 green turtles from 16 foraging areas, stretching from the United States to Chile. In addition to identifying the green turtles’ trophic ecology, the study further establishes compound-specific nitrogen isotope analysis of amino acids as an effective tool to study the trophic ecology of sea turtles across a variety of food webs and habitats.

Trophic niche helps scientists and researchers understand species interactions and structuring of communities, and can help determine implications for species resilience to environmental change. With the bulk skin tissue being collected from foraging sites from the United States to Chile, the study measured green turtles living in multiple sub-regions in the area and under variable habitat conditions. Accordingly, the physical and biological factors that influence green turtle trophic ecology at different sites could be evaluated. The study included green turtles from different habitats, separated by up to 10,000 kilometers. As a result, the study gave insights to characterize niche size and trophic position of green turtles, regardless of locality, habitat type, or ocean basin.

Niche space for green turtles is influenced by inherent differences in individual green turtle diet and habitat use. Additionally, habitat diversity and other outside factors can play a part in determining niche. The study saw green turtles in the eastern Pacific have higher trophic positions and Bayesian ellipse areas (BEA) than their counterparts elsewhere, resulting in higher niche spaces. This was due to the consumption of larger amounts of invertebrates and greater prey diversity.

The study led to other conclusions, including specific differences in BEA among sites. To read the original study, click here.