Stop the Shark Fin Trade in the U.S. 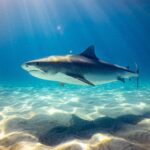 Please urge your representatives to support the Shark Fin Sales Elimination Act to stop the trade of shark fins in the United States.

Shark populations are in crisis due to the global trade in shark fins. Every year, fins from as many as 73 million sharks are traded throughout the world to satisfy the hunger for shark fin soup.

To provide these fins, fisherfolk often engage in shark finning — a horrific practice in which they cut off sharks’ fins, then toss the mutilated animals back into the ocean where they drown, bleed to death, or are eaten alive by other fish. The shark fin trade has also played a major role in the steep decline of shark species worldwide, some populations of which have dropped by as much as 90% in recent decades.

The Shark Fin Sales Elimination Act will help reduce this trade by prohibiting the commercial trade of shark fins and products containing shark fins in the United States — saving these animals from a devastating fate.