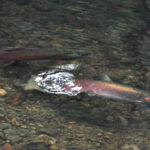 Since mid-March 2022, SPAWN has been monitoring a smolt trap on San Geronimo Creek (SGC) to gauge the endangered coho salmon population within the Lagunitas Watershed. These young coho salmon have spent a year and a half in the freshwater creek and are enroute to Tomales Bay and the ocean, where they will continue their life cycle as adults before returning to spawn in winter 2023-24.

The installed fyke-net pipe trap expands the width of the creek and captures species movement and migration. The three to four inch fish begin to “smolt” or change physically and physiologically, as they lose their spots and “silver out” to prepare for the ocean environment and the transition from freshwater to saltwater. The smolt migration period typically goes through May and as we wind down in the season, there have been a total of 278 coho smolts captured (RAW count–estimated population based upon trap efficiency has not yet been calculated).

In April, due to the multiple storm systems of less than an inch of rain each, flow fluctuated from 6 cubic feet per second (cfs) to 20 cfs on SGC, encouraging easy opportunities for movement but impacting trap efficiency. The current baseline flow within SGC has dropped to less than 2 cfs and hopefully will remain steady throughout the rest of spring. This smolt run has brought low counts compared to previous years recorded out of SGC. However, this was expected due to a second year of drought through winter 2020-21, preventing the parent generation access to spawn in SGC.

According to the adult spawning record for the winter of 2020-21, a combined 13 coho redds (or nests) were classified for SGC and SGC tributaries. Amongst coho salmon, other species were found in the trap this year: chinook salmon, steelhead salmon, rainbow trout, California roach, three-spined stickleback, lamprey, and salamanders.

This past winter 2021-22 brought a lot of rain and our first adult chinook salmon spawners within the SGC watershed. The presence of chinook juveniles and smolts in the trap this spring marks the first year on record that successful chinook spawning occurred in SGC! SPAWN’s data will contribute towards Marin Water’s and the National Park Service’s smolt data, as the coho salmon population for the entire Lagunitas Watershed is estimated. If you have any questions or would like more information regarding SPAWN’s salmonid monitoring efforts, you may contact Ayano Hayes, ahayes@tirn.net.