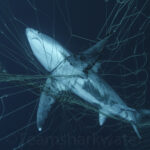 WASHINGTON—The Senate last night unanimously passed the Driftnet Modernization and Bycatch Reduction Act, a bipartisan bill to phase out harmful large mesh drift gillnets utilized in the federal waters off the coast of California, the only place the nets are still used in the United States.

Large mesh driftnets, which are more than a mile long, are left in the ocean overnight to catch swordfish and thresher sharks. Other marine species including whales, dolphins, sea lions, sea turtles, fish, and sharks can also become entangled in the large mesh nets, injuring or killing them. Most of these animals, referred to as bycatch, are then discarded.

Turtle Island Restoration Network has led a coalition of concerned citizens and partner organizations for nearly 20 years, working to stop the devastating impact of this driftnet fishery on sea turtles, whales, dolphins, and other ocean animals. In 2018, California passed a four-year phase out of large mesh drift gillnets in state waters to protect marine life. The Driftnet Modernization and Bycatch Reduction Act would extend similar protections to federal waters within five years and authorize the National Oceanic and Atmospheric Administration to help the commercial fishing industry transition to more sustainable gear types.

“Drift gillnets are responsible for trapping and killing more than 60 different species of marine wildlife, and this legislation will ensure no more whales or dolphins fall victim to this unsustainable fishery,” said Annalisa Batanides Tuel, policy and advocacy manager for Turtle Island Restoration Network. “We are encouraged that the United States is taking steps to address harmful fishing methods in the ocean and off our coasts, as a major cause of biodiversity collapse.”

The use of large mesh driftnets by a single fishery in California is responsible for 90 percent of the dolphins and porpoises killed along the West Coast and Alaska. At least six endangered, threatened, or protected species are harmed by driftnets off the California coast.

“California’s coast is one of the last places where large mesh drift gillnets are still used to catch swordfish, resulting in needless deaths of whales, dolphins, porpoises, sea turtles and other marine animals,” Senator Feinstein said. “We are now one step closer to removing these nets from our waters. There is no reason to allow the carnage of large mesh drift gillnets when there are better, more sustainable methods to catch swordfish. We can preserve the economically important swordfishing industry while protecting the ocean and its wildlife that are vital to California’s economy.”

“While the use of large mesh drift gillnets is already prohibited off the coasts of most states, these tools are still injuring or killing a whole host of marine animals off California’s coast,” Senator Capito said. “These driftnets, which can be more than a mile long, are left in the ocean overnight to catch swordfish and thresher sharks. However, at least 60 other marine species – including whales, dolphins, sea lions, and sea turtles – can also become entangled in these nets, injuring or killing them. With the passage of our bill, we are a step closer to helping protect our marine species by ensuring that these dangerous driftnets are no longer allowed in U.S. waters.”

The bill would phase out the use of the nets and help the industry transition to more sustainable methods like deep-set buoy gear that uses a hook-and-buoy system. Deep-set buoy gear attracts swordfish with bait and alerts fishermen immediately when a bite is detected. Testing has shown that 94 percent of animals caught with deep-set buoys are swordfish, resulting in far less bycatch than drift gillnets.

Turtle Island Restoration Network is a global nonprofit based in Olema, California whose mission is to inspire and mobilize people around the world to protect marine biodiversity and the oceans that sustain all life on Earth.