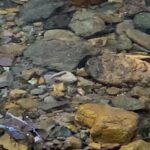 This winter, two atmospheric river rainfalls that seemed like it would erase California’s drought and would be a boon for returning spawning endangered coho salmon were positive and welcome additions of precipitation. As a result of the rain, coho were seen in small tributary creeks like Marin County’s Larsen and Montezuma Creek, where they were seen for the first time in years.

The increased amount of activity in spawning salmon led to a successful creekwalk season, as well as bringing joy to local residents.

Unfortunately, the momentum of the wet closing months of 2021 was slowed down by a very dry 2022. As the new year came, the rain stopped, and along with it, the fear that the eggs deposited in creek gravels would fail to hatch or the recently born fry would have inadequate, wet habitat to survive in.

“It’s February and we are already down to summer water levels in the creeks where some of the small tributary streams are already at risk of disconnection,” said Ayano Hayes, Watershed Biologist for the Salmon Protection And Watershed Network (SPAWN), located in Marin County, CA.

It normally takes about five to seven weeks for the eggs to hatch and for the larval salmon–called alevins–to wriggle their way out of the gravel nest, which can be up to a foot deep, and reach the surface. If the eggs or juvenile fish become dessicated due to lack of water, or get entombed by too much sedimentation from erosion caused by development in the watershed, they won’t survive.

“We would expect to see the young salmon in February, but so far we have not seen many, causing concern that the decent number of spawners we saw earlier, may not produce fish that will be the spawners three years from now,” said Preston Brown, SPAWN’s Director of Watershed Conservation.

Coho salmon in Marin produce an average of 2,000 eggs, yet even under ideal conditions only a fraction of these will survive to adulthood. Even after hatching, the salmon will have to survive the next 1½ years in freshwater before they head out to sea to mature to adults. Predators ranging from crayfish to herons to river otters will all take their toll.

However, drought can be extremely severe, leaving juvenile salmon stranded in drying pools with lack of food, oxygen, and escape routes from hungry predators. In the Lagunitas Watershed, where floodplain habitat has been destroyed and residential development has resulted in downcut stream banks, ironically, too much water also is a limiting factor to survival.

“Juvenile coho salmon must survive their winter in our creeks and while the fish are only a couple inches in length, providing refuge during heavy winter storms can make a drastic difference to their survival,” said Hayes.

“Recreating floodplains and restoring connectivity through restoration give our salmon a fighting chance at recovery and survival, said Brown.

“In addition to repairing our past land use mistakes that have caused salmon to be threatened with extinction, we must make sure we don’t repeat them in the present. That’s why we’re also fighting to ensure good policies that protect salmon from extinction and humans from the impacts of flooding in the climate-changing world we’re in. A mistake repeated over and over again is not a mistake, it’s a bad decision”, said Todd Steiner, the founder of SPAWN.

Watch some footage below: