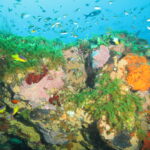 AUSTIN—The Flower Garden Banks National Marine Sanctuary, the only known nursery in the world for manta rays and important feeding grounds for sea turtles, sharks and many species of fish, will be expanded by 104 square miles, according to a final rule announced today by the National Marine Fisheries Service.

The expansion is smaller than the one preferred by the public in the last comment period, leaving out 223 square miles that could have been protected, but still increases the sanctuary from 56 square miles to 160.4 square miles and adds 14 new reefs and banks to the protected region.

The National Oceanic and Atmospheric Administration (NOAA) said in the final rule the decision to implement the smaller expansion was “to promote compatibility with users and reduce potential economic impacts to the offshore energy and fishing industries.”

“Although this plan extends protections, we are disappointed the alternative that would have allowed for the largest possible expansion was not chosen,” said Joanie Steinhaus, Gulf Program Director of Turtle Island Restoration Network. “It is the responsibility of NOAA to protect marine environments of significant importance. The marine animals that mate, feed, nurse, and live in Flower Garden Banks deserve the best protection possible.”

The Flower Garden Banks National Marine Sanctuary, designated in 1992, is located 115 miles off the coasts of Texas and Louisiana to protect the unique coral habitats that cover the region’s beautiful underwater mountains, called banks. Stetson Bank, located 70 miles off the Texas coast, was added to the sanctuary through congressional action in 1996. The three banks, encompassing 56 square miles, include the northernmost coral reefs in the continental United States, deep-water reef communities, and other essential habitats for a variety of marine species.

“Every step we take to protect these beautiful ecosystems is a victory for the manta rays, sea turtles, and hammerhead sharks that call our Gulf home. But we need more protections as soon as possible to fend off the threats of oil drilling and climate change,” said Anna Farrell-Sherman of Environment Texas Research and Policy Center. “We hope this announcement becomes the first in a string of victories for protecting our oceans”

Expansion of the sanctuary emerged as one of the top priority issues during a review of the sanctuary’s management plan in 2012. The Deepwater Horizon oil rig explosion, which resulted in the largest marine oil spill in U.S. history, also accelerated interest in expansion, with government scientists and non-governmental organizations urging additional protections for marine life and essential Gulf habitat. The plan will become effective after 45 days of continuous session of Congress. During that time, Congress will have the opportunity to review the final proposal.

Turtle Island Restoration Network is a global ocean conservation nonprofit that works to protect and restore populations of endangered sea turtles and marine biodiversity on the Texas coast and throughout the Gulf of Mexico. Learn more at www.seaturtles.org/gulf.