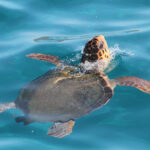 This means the Hawai’i longline fleet would be allowed to interact with – hook, capture, entangle, and kill – an unlimited number of  loggerhead sea turtles with zero constraints.

Sea turtles and marine mammals become hooked on longlines while trying to take bait, or become entangled while swimming through the walls of nearly invisible lines and hooks — encounters that can drown the turtles or leave them fatally injured.

The population of loggerhead sea turtles has declined 90 percent over the past 60 years. NMFS should be decreasing interaction limits – so this deadly fishing practice is shut down after interacting with a single endangered or threatened sea turtle.

Will you add your name to our letter, asking NMFS to oppose the change of sea turtle interaction limits in the Hawai’i-based longline fishery to protect loggerhead sea turtles?