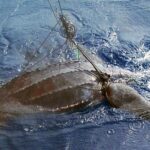 Critically endangered leatherback sea turtles are drowned and killed by commercial fisheries, such as longlines and driftnets, as incidental bycatch. Entangled in fishing line or net, leatherbacks struggle to swim to the surface to breath. Shallow set longlines are particularly deadly to these gentle giants.

Now, the Pacific Fisheries Management Council (PFMC) will consider an amendment to our Fishery Management Plan which would authorize shallow set longline gear off the coast of California. We can’t let that happen.

Will you sign our petition in opposition to the proposed California longline fishery?

PFMC is accepting comments from concerned individuals regarding this amendment until November 4th – and we’re preparing for the hearing in Southern California.

Longline fishing methods set lines up to 60 miles long with thousands of hooks that catch and kill marine life indiscriminately. Off the West Coast, longlines have been responsible for killing myriad marine species as bycatch, including endangered or threatened populations of Pacific leatherback and loggerhead sea turtles, albatrosses, and sharks.

Marine wildlife, including endangered sea turtles, dolphins, whales and sea birds, will continue to be injured and killed senselessly if we don’t put a stop to the PFMC’s proposed authorization of a shallow set longline fishery off the California coast.

After a hard won victory last fall that will transition California away from the drift gillnet fishery, we must not let one devastating fishing method be replaced by another equally destructive method. Please, sign our petition and take a stand for leatherback sea turtles, and indeed all vulnerable marine wildlife.