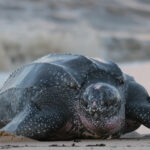 The National Marine Fisheries Service released a list of nine marine species most at-risk of extinction in the near future, known as the Spotlight Priority Action Plans. The NOAA Fisheries’ plans for these highlighted species emphasize the actions and its partners can take to reverse the declining populations of these species that are at risk of extinction.

Among the nine species in the spotlight are Pacific leatherback sea turtles. Currently listed as endangered under the Endangered Species Act, these majestic turtles face human-caused threats such as construction, development, and other economic activity. Pacific leatherbacks face significant threats from bycatch in fisheries, direct harvest of both eggs and turtles, coastal development, the effects of climate change, and more. The Pacific leatherback sea turtles are included in the NOAA Fisheries plans due to their high risk of extinction from these dangers.

The action plans outline the steps to counteract these human-caused threats and other risks facing the Pacific leatherback sea turtles. They highlight the most important actions needed in the near-term future to halt the decline of the species and lead them toward the road to recovery. In the next five years, highlighted actions for recovery include reducing bycatch support of research and monitoring, improving protection on nursing beaches, and more.

These are just a few of the actions listed on the plans to try safeguard the Pacific leatherbacks. To read more about the species and the specific methods outlined by the NOAA, you can find the plan here.