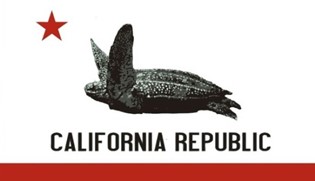 California’s Leatherback Conservation Day became law in 2012, thanks to the work of then Turtle Island Restoration Network (TIRN) lead campaigner Teri Shore, who first proposed it and found state legislators to sponsor the legislation. (Teri is now a TIRN Board member).

The California Marine Reptile Bill in 2012, AB 1776, was sponsored by TIRN and designated Pacific Leatherback Conservation Day on October 15 every year, and also prioritized conservation of this critically endangered sea turtle species. The state law also calls for increased education and outreach to schools and all Californians about the importance of leatherback sea turtles along our coast.

Pacific leatherbacks are on the verge of extinction, with populations of nesting females dropping from tens of thousands 40 years ago to just a couple of hundred in the eastern Pacific, and less than 3,000 in the western Pacific.

The California Marine Reptile Bill was only one small part of our strategy to bring Pacific leatherbacks back from the brink of extinction, a program that will continue until we reach this goal.

Many other parts of the strategy have succeeded in reducing mortality, and many additional strategies are underway. Two successful approaches featured protection for habitat and status:

A major threat to leatherbacks is from deaths and injuries from fishing gear. Two industrial fisheries considered the greatest threats are from longline and driftnet (gillnet) fishing. Domestically, TIRN has pushed for reform toward both these fishing methods.

In addition to our efforts domestically, our strategy to bring Pacific leatherbacks back from the brink of extinction includes international endeavors.

As the years roll on, our efforts in saving the Pacific leatherback will continue. Our fight is heavily bolstered by your support. Consider supporting TIRN’S ongoing efforts to save the leatherback by donating. You can also show your support by staying informed of ongoing actions you can participate in by joining our network of activists.