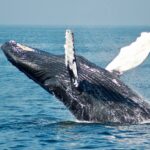 Sea turtles, whales, and other marine wildlife are at risk of becoming entangled in commercial fishing gear off the west coast of the United States, with numbers increasing in recent years. To combat this, the Oregon Department of Fish and Wildlife (ODFW) recently developed a Draft Conservation Plan outlining how the state will reduce entanglements of marine wildlife in the commercial Dungeness crab fishery in Oregon waters.

To combat the problem of entanglement, the state is seeking a federal permit via the ESA. This permit would allow the state to make management actions—such as fishery closures—if the limits on the number of protected species becoming entangled is exceeded.

While the work of the ODFW to reduce entanglement and risk is commendable, more work needs to be done. Turtle Island Restoration Network, alongside other organizations, submitted a letter to the ODFW highlighting their concerns and suggestions for revising the Draft Conservation Plan.

Among the suggestions and concerns TIRN submitted are:

TIRN supports ODFW’s proactive effort to reduce the risk and harm that Oregon crab gear poses to marine wildlife, and supports the goal of having both healthy fisheries and a thriving ecosystem. The suggestions and concerns highlighted in the letter submitted to the ODFW will help make the conservation plan stronger and more lasting for our planet.

To read the letter in its entirety, click here.