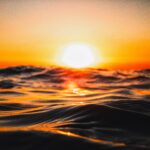 Since measurements began over six decades ago, oceans were the hottest ever recorded this past year. In a study published in Advances in Atmospheric Sciences, researchers say the increased warmth was spurred by increased anthropogenic greenhouse gas concentrations. Resulting from human activities, the greenhouse gas concentrations trap heat within the climate system.

Outgoing energy from Earth is not balanced by incoming solar radiation as a consequence, creating what the researchers call Earth’s Energy Imbalance. Over 90% of this imbalance of increased heat is stored in the planet’s oceans, resulting in higher temperatures in the water.

Researchers found oceans are steadily increasing in temperature. Warming has occurred since 1958, with each decade warmer than the last. Worryingly, warming has significantly increased since the 1980s.

These warmer temperatures in the oceans can lead to other significant problems, including increased extreme weather events, rising sea levels, increased air temperatures, and more. The effects of the warmer oceans can be long reaching and long lasting, making it imperative we work toward slowing these alarming trends.

To read the entire study, you can view it here.