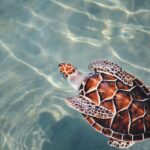 Mexican Government Reject Bycatch as Cause

Over the past few years, the amount of North Pacific loggerhead sea turtle deaths in Baja California Sur, Mexico has been an issue, and in 2020, they increased to alarming and dire numbers. At least 1,977 turtles died over the past four years, but 2020 resulted in more deaths than the previous three years combined, with 1,088 deaths, likely because of entanglement in fishing gear. The actual number of deaths is likely much higher. Not all dead sea turtles will be stranded on local beaches, and many are carried away by currents and not recorded.

These numbers came from official data from the Mexican government and suggest a disturbing increase in entanglements. However, the Mexican government denied turtles died from being trapped in fishing gear, despite scientific evidence showing the main cause of loggerhead turtle mortality being entanglement. The government continues to deny bycatch as a cause of death, even with international scrutiny and the increased numbers of sea turtle deaths.

In an effort to curtail the issue, conservation groups requested the Commission for Environmental Cooperation to formally record and review the efficacy and enforcement of Mexican laws in environmental efforts.