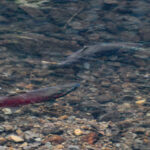 Marin County, Calif. (July 20, 2022) – A 15-year battle over salmon in California’s most important watershed for the critically endangered coho salmon was finally ended this week with the passage of a Stream Conservation Area (SCA) Ordinance that scientists and environmentalists believe provides adequate protection of habitat for imperiled Central Coast Coho salmon and Steelhead trout in the San Geronimo Valley/Lagunitas watershed.

This was the result of litigation initially brought in 2007 by The Salmon Protection and Watershed Network (SPAWN) and strengthened by the participation of the Center for Biological Diversity (CBD). For over a decade, the County of Marin struggled to end a series of unfavorable legal decisions that found their environmental analysis and proposed mitigation measures to protect salmon legally indefensible.

The Marin Superior Court judge ruled last year that the County violated state environmental law by failing to mitigate the cumulative impacts of streamside development in the watershed that would be allowed under the 2007 Countywide Plan, following an earlier ruling that compelled the County to redo its inadequate environmental analysis.  In 2013, the County even passed an inadequate ordinance with a ‘poison pill’ that killed the legislation if it was challenged in Court, which SPAWN and CBD did immediately.

“We stood our ground and are delighted that we finally have science-based regulations that will give the endangered coho salmon a fighting chance at survival in Marin. This population is critical to the survival of the species throughout Central California,” said Todd Steiner, ecologist and executive director of SPAWN.

The new Stream Conservation Area Ordinance with science-based protections will ensure “no net loss of habitat,” and will improve riparian habitat and water quality in the San Geronimo Valley, the last undammed headwaters of the Lagunitas Watershed, which runs through State and National Park lands before emptying in the Tomales Bay to the Pacific Ocean.

“This is a watershed moment for Lagunitas Creek Coho and park land downstream that is impacted by hundreds of years of poor land management in the San Geronimo Valley. So much effort has been spent on habitat restoration and fixing those land-use mistakes of the past, yet before today, we continued to repeat those mistakes because of inadequate policies to protect the remaining habitat. Addressing Coho recovery through a common-sense streamside ordinance is a major accomplishment,” said Preston Brown, Director of Watershed Conservation with SPAWN.

“It’s about time endangered coho salmon get the protection they need to survive a warming planet,” said Peter J. Broderick, an attorney at the Center for Biological Diversity. “I’m relieved that after many years of litigation, the county has finally agreed to do the right thing and adopt these common-sense measures before it’s too late.

“We now have a chance to work cooperatively with Marin County to improve habitat for salmon by reducing flooding and pollution that threaten San Geronimo residents and the tens of thousands of visitors who recreate in our Park creeks downstream,” said Scott Webb, Advocacy & Policy Manager for SPAWN. “Streams are in greater peril than when the ordinance was proposed decades ago. As the valley goes, so do the salmon, making it paramount to protect the riparian habitat we have left while we continue to work hard to restore the habitats we’ve lost.”

SPAWN and the Center for Biological Diversity are represented by attorneys at the Stanford Law School Environmental Law Clinic and the Law Offices of Michael W. Graf.

The Salmon Protection and Watershed Network (SPAWN) is a program of the global ocean conservation non-profit Turtle Island Restoration Network that protects endangered marine species around the world. Learn more at www.seaturtles.org/salmon.