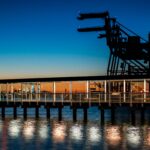 Turtle Island Restoration Network (TIRN) recently signed a letter with other organizations around the country supporting the BAN (Block All New) Oil Exports Act. We support this important legislation, and the letter is currently making its way around Senate offices.

With the World Leaders Summit on Climate Change approaching, a strong message to global leaders that climate action must not further the global and gas market is needed. Addressing the climate crisis requires more than a lesser dependence domestically.  Fossil fuels in international markets also need to be reduced, and banning the export of crude oil and natural gas produced in the United States is a big step.

Exports lead to a legacy of pollution. Ending these exports would help support frontline communities that are inundated with pollution from oil and gas drilling and fracking, as well as pipelines, compressor stations and liquefied natural gas (LNG) export facilities. Fracking leaves behind scarred landscapes and financial liabilities left at the feet of taxpayers. Fracking also leads to climate change , and damages the natural habitats of vulnerable marine animals.

The damage to the planet from these exports is huge, and we call on Congress to end all oil and gas exports. Introduced by Senator Markey (MA), the letter TIRN signed is getting sent to different Senators, in an effort to yield further support of the BAN Oil Exports Act. This act would reinstate the 2015 export ban, and impose restrictions on exports of coal, petroleum products, natural gas, petrochemical feedstocks, and related supplies and materials.