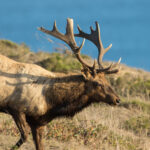 POINT REYES STATION, Calif. — The National Park Service today issued a record of decision for the future management of all lands currently under agricultural lease/permit within Point Reyes National Seashore and the management of free-ranging tule elk in those areas.

Despite growing protests over the impacts of ranching, General Management Plan Amendment adds 7,600 acres to a newly carved out “ranching zone;” permits ranchers to diversify and increase livestock beyond the more than 5,000 beef and dairy cattle that currently graze the park; allows ranchers to grow commercial crops; permits mobile slaughter units on the cattle ranches; and will proceed with killing native tule elk.

“The Biden administration’s decision to expand ranching operations in Point Reyes is a devastating blow to the only national seashore on the West Coast,” said Scott Webb of Turtle Island Restoration Network. “Under this plan, the government will continue to subsidize environmentally destructive practices that threaten the health of our public lands, water quality, and biodiversity. It is time for science, not profits, to shape environmental legislation in this country.”

Ranching at Point Reyes arrived with the Gold Rush and has been ongoing at the National Seashore since Congress established it on September 13, 1962. The National Park Service bought the land from ranching families and allowed them to temporarily lease back the land to ease their transition from the newly established park. Approximately 5,600 cattle still graze, degrade and pollute the land and waterways in the park today.

Thousands of concerned individuals including tribal members, scientists, park users, animal rights and environmental justice advocates have written and testified in opposition to ranching during the protracted planning process and continue to send letters, sign petitions and stage protests.