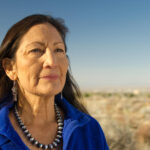 The Interior Department sees roughly one-fifth of all the land in the country, in addition to 1.7 billion acres of the country’s coasts. Managing national parks, wildlife refuges, and other public lands, Haaland will oversee the department in its efforts to protect these areas and the wildlife that reside in them.

A 35th generation resident of New Mexico and member of the Laguna Pueblo, Haaland’s appointment to the position made history, becoming the first indigenous person to manage the Bureau of Indian Affairs and Bureau of Indian Education. She is now responsible for other agencies such as the Bureau of Land Management, the United States Geological Survey, and the National Park Service.

Turtle Island Restoration Network is excited to work with Secretary Haaland. Her history of promoting environmental justice, protecting endangered species, and strengthening the conservation management of our public lands, waters, and oceans make us excited for the future of the Interior Department. We look forward to working with her for a blue-green planet.