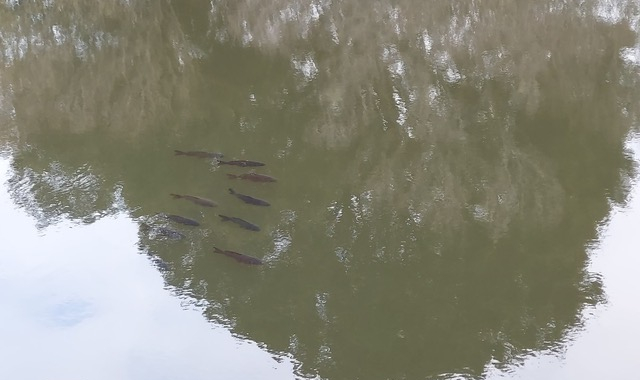 Naturalist-led Creek Tours Being Offered to the Public

Wild coho salmon return to their natal streams with the first fall rains and can be observed spawning from November through January when conditions are right.

The bright red two-foot long fish are returning from the ocean to where they were born to complete their ancient ritual of laying their eggs to perpetuate their species before dying and becoming fertilizer for the redwood trees that line the creek.

“It’s an incredible spectacle to watch these fish leap waterfalls, hear them splash around as they maneuver up shallow riffles, and witness the hooked-nose males fight for the opportunity to fertilize the female’s eggs in the nest she builds and protects until death,” said Ayano Hayes, Watershed Biologist for SPAWN. “This is the part of their epic journey of coming home, as these fish left their natal streams a year and half ago for the ocean as cigar-sized fish. The ones that have survived their ocean phase are now migrating back as two-foot adults after only 18 months at sea.”

Locally, wild coho have experienced perilous declines over the past five decades.  Historically, as many as 5,000 nesting females have laid eggs in the Lagunitas Creek watershed of Western Marin County each fall. But today, only 500 fish on average return each year.  Many coastal streams in the Bay Area once supported coho salmon and provided sustenance for both people and wildlife. Yet Lagunitas Creek is considered a stronghold since most streams in California are too urbanized or polluted to support this species.  Now endangered, it is illegal to harvest coho salmon in California.

Millions of dollars are being invested in protecting and restoring salmon habitat in Marin County and other streams in Central California by non-profit organizations like SPAWN, and government agencies such as the National Park Service, CA Department of Fish & Wildlife, and the Marin Water District.

“Coho salmon are iconic keystone species that are critically important to protecting Redwood ecosystems, by bringing nutrients back from the sea to feed the trees and wildlife of our region that help sequester carbon and help moderate climate change,” said Todd Steiner, ecologist and Executive Director of Turtle Island Restoration Network.

We are fighting to recover endangered salmon in California and we hope you too can join us to further advocate for and protect this vital species in our ecosystem.

SPAWN, the Salmon Protection And Watershed Network, a project of Turtle Island Restoration Network, leads naturalist-led creek tours for the public to promote fish-friendly viewing that does not disturb these endangered species. For more information and to sign up, please visit our website. For more information or questions about where to view spawning coho in the North Bay please contact Ayano Hayes, at ahayes@tirn.net.

SPAWN (Salmon Protection and Watershed Network) was founded in 1997 to protect endangered salmon in the Lagunitas Watershed and the environment on which we all depend. SPAWN uses a multi-faceted approach to accomplish our mission including grassroots action, habitat restoration, policy development, research and monitoring, and an emphasis on environmental education.  SPAWN is a project of Turtle Island Restoration Network, a 501(c) 3 organization is an international marine conservation organization headquartered in California which work to protect endangered wildlife and marine biodiversity in the United States and around the world. For more information, visit https://seaturtles.org.