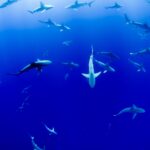 Sharks are considered a commercial species in the country, which allows endangered shark species to be overfished and increase their chance at extinction. Despite President Alvarado stating that endangered shark species should enjoy protection under the Wildlife Conservation Law, the letter explains that “these statements contradict Executive Decree No. 42482 signed last February 18, which promulgated that sharks are commercial species, beyond the reach of the protections that could be provided by the Wildlife Conservation Law.”

Under the Wildlife Conservation Law, species that have been declared as endangered by the State can not be subject to commercial exploitation and must be protected. The group’s letter calls upon the president to acknowledge the statement question is also contrary to the criterion of experts from the Ministry of Environment and the National Council of Protected Areas (CONAC), which recently listed 12 species of sharks under the official list of endangered species list of marine-coastal fish (bony fish and elasmobranchs), mollusks, mammals, reptiles and bird species.