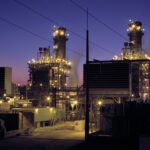 Among the things asked for in the letter, the different groups asked for:

The surrounding communities are subject to the negative consequences of LNG production and exports, and TIRN joined in searching for answers. To read the letter in its entirety, you can do so here.