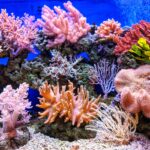 According to a new report, 14% of the world’s coral was lost in the past decade (2009-2018) due towarming sea surface waters caused by climate change.

As a result of warmer water temperature, corals were subject to “bleach,” a process that occurs when the algae that live in coral are expelled. These beneficial algae provide coral they live in with food, as well as its beautiful color.

Corals are more than just beautiful to look at. The new report estimated the decline of coral reefs threatens millions of people who rely on them for food, jobs and protection. Coral are also behind $2.7 trillion a year in goods and services, including $36 billion in tourism.

Sometimes bleached coral recovers and these underwater ecosystems have bounced back in the past, leaving some hope for the future. According to the scientists, this means the world can still rescue much of the planet’s coral if it steps in fast enough to curb emissions.

“We are running out of time: we can reverse losses, but we have to act now,” said Inger Andersen, the head of the United Nations Environment Program.