California Agency: Protection for Leatherback Sea Turtles May Be Needed 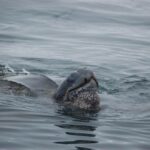 A leatherback sea turtle swims off the coast of California. | Photo by Pete Winch

California Agency: Protection for Leatherback Sea Turtles May Be Needed

SACRAMENTO, Calif.— The California Department of Fish and Wildlife recommended today that Pacific leatherback sea turtles move toward protection under the state’s Endangered Species Act. The action came in response to a petition from Turtle Island Restoration Network and the Center for Biological Diversity.

The Pacific leatherback population has declined by 90% over the past 40 years, mostly because longline and gillnet fishing for tuna and swordfish entangles and drowns these giant, ancient, soft-shelled turtles. Scientists predict that, without help, Pacific leatherbacks could be extinct in 20 years.

“Declaring the Pacific leatherback endangered is sorely needed and the first step toward recovery of one of California’s most giant, gentle and unique marine species,” said Todd Steiner, a wildlife ecologist and executive director of Turtle Island Restoration Network. “In order to give this amazing species a fighting chance at survival we must now eliminate all threats from commercial fishing, pollution and climate change.”

In August 2020 California’s Fish and Game Commission is scheduled to decide whether to accept the department’s recommendation and grant these imperiled turtles candidate status under state law. A candidate designation triggers a yearlong review of whether the species should be formally protected by the state; the species is legally protected during that review period.

Pacific leatherback sea turtles are highly endangered and listed under the federal Endangered Species Act. In 2016 the National Marine Fisheries Service identified leatherback sea turtles as one of eight species most at risk of extinction. The Service says reducing their entanglement in fishing gear is the top priority for ensuring their survival.

TIRN and the Center sued the Trump administration after a fishing permit issued last year exempted vessels from the federal ban on longline gear off California. Longlines stretch up to 60 miles, with thousands of baited hooks. A federal judge in Oakland ruled Dec. 20 that the federal government had failed to adequately consider impacts on leatherbacks when it revived longline fishing, blocking the permit.

Recommendation from the California Department of Fish and Wildlife