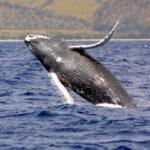 The action was prompted by a 2018 legal victory by the Center for Biological Diversity, Wishtoyo Foundation and Turtle Island Restoration Network. The groups had sued over the federal failure to designate critical habitat as required by the Endangered Species Act. The suit led the Trump administration to issue a proposed rule in 2019 and today’s final rule.

“Today is a good day for humpback whales and the ocean all living things depend on,” said Todd Steiner, executive director of Turtle Island Restoration Network. “Designating 116,000 square miles of critical habitat in the ocean is something to celebrate, but whales, turtles and dolphins still need additional protection from industrial fishing and ship strikes to recover and thrive, so we won’t be resting on our laurels.”

The biggest threats in humpback habitat are ships and fishing gear. The Center sued the federal government in January for failing to protect endangered whales from speeding ships using California ports. The organization is also co-sponsoring the California Whale Entanglement Prevention Act (Assembly Bill 534), which would require the state’s commercial Dungeness crab and other trap fisheries to convert to ropeless gear (also known as “on-demand” or “pop-up buoy” gear) by the end of 2025.

“Pacific humpbacks finally got the habitat protections they’ve needed for so long. Now we need to better protect humpbacks from ship strikes and entanglement in fishing gear, their leading causes of death,” said Catherine Kilduff, an attorney with the Center. “To recover West Coast populations of these playful, majestic whales, we need mandatory ship speed limits and conversion of California’s deadly trap fisheries to ropeless gear.”

Critical habitat protection will help safeguard ocean areas essential for migrating and feeding. The designation will ensure that federally permitted activities do not destroy or harm important whale habitat. Evidence shows that endangered or threatened species that have protected critical habitat are twice as likely to be recovering as those without it.

Founded in 1997, Wishtoyo Foundation is a 501(c)(3) nonprofit grassroots organization that enhances the well being of communities by preserving and protecting Chumash Native American culture, and the natural resources all people depend upon throughout California and the traditional Chumash range in Ventura, Los Angeles, Santa Barbara and San Luis Obispo counties. To learn more about Wishtoyo visit us at www.wishtoyo.org.